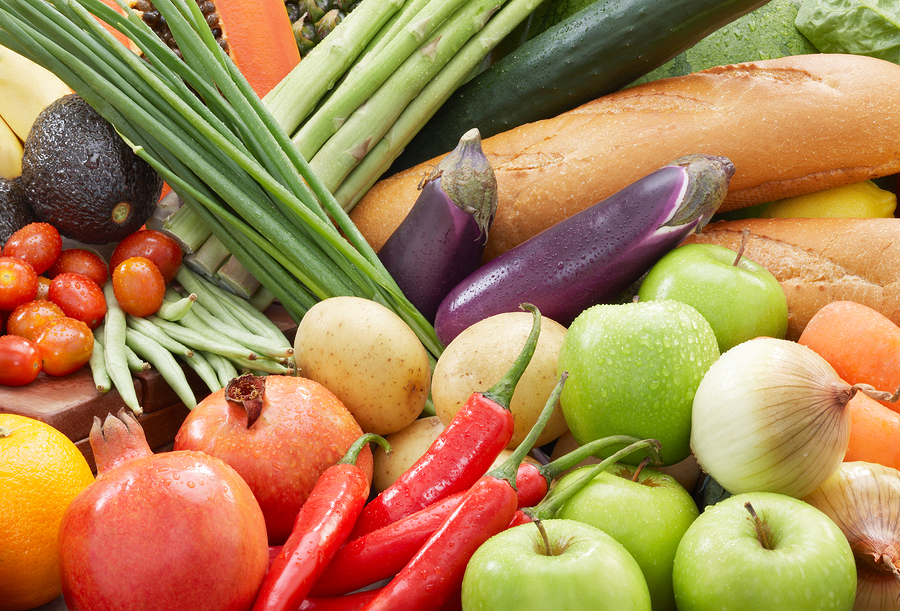 Carbohydrates are sugar compounds produced by the process of photosynthesis in plants. They are divided into three categories, simple carbohydrates, complex carbohydrates, and dietary fibre, based on the number of sugar units they contain and how those units are joined together. Simple carbohydrates contain one or two sugar units, with the former referred to as monosaccharides, and the latter as disaccharides. Examples of monosaccharides are fructose (fruit sugar) and glucose (derived from the digestion of carbohydrates). Examples of disaccharides are sucrose (table sugar) and maltose (malt sugar). Complex carbohydrates have three or more sugar units and are referred to as polysaccharides, an example of which is starch (found in pasta, rice and potatoes and composed of many glucose units joined together). Dietary fibre is also a polysaccharide, examples of which are cellulose (another compound composed of many glucose units) and pectin (a compound found in apples which is composed of galactose, arabinose, galacturonic acid). In general terms, the simpler mono and disaccharides tend to be sweeter in taste than the more complex polysaccharide molecules.

What is their purpose?

The primary fuel of the body is glucose. Inside every cell in the body, glucose is converted into a substance known as adenosine triphosphate, or ATP, which provides the energy for that cells' function. Simple and complex carbohydrates in the diet provide glucose, or sugar units which are readily converted into glucose, for cellular energy production. Excess glucose is stored by the body in the liver and muscle tissue in a more complex form known as glycogen. When glycogen stores reach capacity, any additional glucose can be converted into fat. To satisfy energy needs, the body preferentially uses glucose in the blood, followed by stored glycogen. When these sources are depleted, as may be the case when following a carbohydrate-restricted diet for example, the body begins to burn protein tissue in order to generate glucose, an obviously unsustainable process!

How much do I need?

What are good dietary sources?

What about the glycaemic index?

Intake of carbohydrate-containing foods causes an increase and subsequent decrease in the concentration of glucose in the blood, known as the glycaemic response. This process reflects the rate of digestion and absorption of glucose in addition to the ability of insulin to regulate blood glucose levels. The rate and duration of the glycaemic response is influenced by the type of food consumed (sugar and starch composition / cooking and processing methods / relative fat, protein and fibre content), and the person consuming the food (extent of oral digestion by chewing / rate of gastric emptying and small bowel transit time / metabolic rate / time of day).

The influence of different carbohydrate-containing foods on the glycaemic response of the body is classified relative to the effects of glucose, within 2 hours following consumption. This measurement is referred to as the glycaemic index (GI). A GI of 70 indicates that the carbohydrate-containing food or drink causes 70 % of the blood glucose response observed with the same amount of carbohydrate from pure glucose. High GI foods cause a greater blood glucose response than low GI foods, which are disgested and absorbed at a slower rate. Evidence suggest that a diet based on low GI foods is associated with a reduced incidence of metabolic disorders such as obesity and type 2 diabetes.

What does the evidence say about the effects of carbohydrates on health?

In June 2014, The Scientific Advisory Committee on Nutrition (SACN), a group of independent experts that provides advice to UK government agencies and departments to inform public health policy, published a detailed document entitled 'Draft Carbohydrates and Health report'. In this report (http://www.sacn.gov.uk/reports_position_statements/reports/scientific_consultation_draft_sacn_carbohydrates_and_health_report_-_june_2014.html), SACN members performed an evaluation of the existing scientific evidence on the relationship between dietary carbohydrates and health. Based on combined results from the research studies investigated, the conclusions of the committee can be summarised thus:

The results of this authorative report show that carbohydrates are not the anathema to good health that many would have us believe. Whilst the evidence clearly indicates that the intake of sugars and sugar-sweetened foods and drinks should be minimised to control weight gain and the risk of dental carries in the young, total carbohydrate intake as a whole is not associated with any adverse health effects investigated in the report. It also indicates that decreases to body mass index can be achieved without cause to dietary carbohydrate reduction per se. Furthermore, the report shows that intake of carbohydrate in the form of dietary fibre is associated with lower rates of cardiovascular disease, type 2 diabetes, and certain cancers.